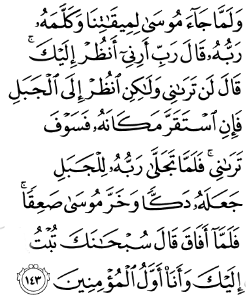 "And when Moses came to Our appointed meeting and his Lord spoke unto him, he said, 'My Lord, show me, that I might look upon Thee.' He said, 'Thou shalt not see Me; but look upon the mountain: if it remains firm in its place, then thou wilt see Me.' And when his Lord manifested Himself to the mountain, He made it crumble to dust, and Moses fell down in a swoon. And when he recovered, he said, 'Glory be to Thee! I turn unto Thee in repentance, and I am the first of the believers.'"

Every one of man's faculties has its appropriate function which it delights to fulfill. This holds good of them all, from the lowest bodily appetite to the highest form of intellectual apprehension. But, even a comparatively low form of mental exertion affords greater pleasure than the satisfaction of bodily appetites. Thus, if a man happens to be absorbed in a game of chess, he will not come to his meal, though repeatedly summoned. And the higher the subject-matter of our knowledge, the greater is our delight in it; for instance, we would take more pleasure in knowing the secrets of a king than the secrets of a vizier. Seeing, then, that God is the highest possible object of knowledge, the knowledge of Him must afford more delight than any other.

But, the delight of knowledge still falls short of the delight of vision, just as our pleasure in thinking of those we love is much less than the pleasure afforded by the actual sight of them. Our imprisonment in bodies of clay and water, and entanglement in the things of sense constitute a veil which hides the Vision of God from us, although it does not prevent our attaining to some knowledge of Him. For this reason God said to Moses on Mount Sinai, "Thou shalt not see Me."

The truth of the matter is this that, just as the seed of man becomes a man, and a buried date stone becomes a palm tree, so the knowledge of God acquired on Earth will in the Next World change into the Vision of God, and he who has never learnt the knowledge will never have the Vision. This Vision will not be shared alike by all who know, but their discernment of it will vary exactly as their knowledge. God is one, but He will be seen in many different ways, just as one object is reflected in different ways by different mirrors, some showing it straight, and some distorted, some clearly and some dimly. A mirror may be so crooked as to make even a beautiful form appear misshapen, and a man may carry into the next world a heart so dark and distorted that the sight which will be a source of peace and joy to others will be to him a source of misery. He, in whose heart the love of God has prevailed over all else, will derive more joy from this vision than he in whose heart it has not so prevailed; just as in the case of two men with equally powerful eyesight, gazing on a beautiful face, he who already loves the possessor of that face will rejoice in beholding it more than he who does not.

Remembrance gives to the one who practices invocation such strength that he is able to do what he does not have the strength to do without it.

Ibn Taymiyya narrated, 'When the angels were commanded to bear the Throne [of God], they said: "Our Lord, how can we bear Your Throne when upon it is Your greatness and might?" He said, "Say: lâ hawla wa lâ quwwata illâ bi Allâh (There is neither power nor strength save in God.)" Upon pronouncing this, they carried the Throne.'

These words have the striking effect of helping one to accomplish difficult work, bear fatigue, visit kings and endure fear or dreadful experience. They also have the striking effect of warding off poverty. For according to a hadith related by Ibn Abi l-Dunya, the Messenger of God said, 'For whoever says "There is neither strength nor power save in God" one hundred times, no day shall be afflicted by poverty.'

With regards to relations with non-Muslims, Emperor Aurangzeb (r. 1658-1707) has achieved a modern reputation as a bigoted and intolerant sovereign. His legacy is indicative of the impact that modern politics has on how people understand the past. Worthy of particular scrutiny is the fact that numerous Hindu temples across India were destroyed during his reign. That historical fact, coupled with his intense devotion to Islam, has led many historians and writers in the modern era to refer to him as an intolerant and oppressive ruler. But the reasons behind his destruction of Hindu temples must be analyzed to understand what kind of a ruler he was, and more generally, the nature of Mughal rule itself. During the seventeenth century, temples in India were commonly used as political centres as well as places of worship. Temple leaders regularly served the Mughal Empire as political officers in their respective jurisdictions, helping maintain order and imperial control. The temples destroyed by Aurangzeb correspond to political revolts against Mughal rule led by temple officials, a trend that increased during his reign, especially with the creation of the Maratha Confederacy that arose in the late 1600s. Thus, in the eyes of the Mughal Empire in the seventeenth century, destroying a temple was not an act of religious oppression, but of political survival. In fact, during Aurungzeb's reign, numerous new temples were built throughout India, and many of his top advisors were Hindus. One of the dangers of a superficial study of history that has to be avoided in today's politically-charged world is the imposition of modern political conflicts onto the legacy of ancient figures.