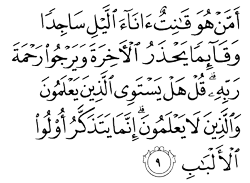 "Is one who does devotions throughout the night, prostrating himself and standing, cautious about the next world and hoping for the mercy of his Lord? Say: 'Are they equal, those who know and those who know not?'"

"Devotion" is undertaking the courteous acts of service outwardly and inwardly without slackening or shortcoming, being cautious because of the threatened chastisement and hoping for the promised reward.

This is the attribute of a group who are constantly at God's threshold in the station of service. Their makeup at the time of prayer becomes entirely reverence itself, and they are always burning in remorse because of shame for sin. One of the great ones of the religion said, "You must show reverence for God's commands, for it is not apparent which command brings proximity to God. You must avoid all prohibited things, for it is not apparent which prohibition brings distance from God."

In contrast, a service that is done because of servanthood has both free choice and coercion. The person is seeking a reward and expecting recompense.

Beyond all these is a knowledge never reached by the Adamite's imagination or grasped by his understanding. It is God's knowledge of Himself in keeping with His reality. God says, "They encompass Him not in knowledge" [20:110].

Abu Hurayrah reports: 'Whenever I see Hasan, my eyes are filled with tears because the Prophet (peace be upon him) went out one day and found me in the mosque. He took me by the hand and I walked with him. He did not speak to me until we reached the Qaynuqa market. He walked there and looked around then he left and I went with him until we returned to the mosque He sat and wrapped himself in his garment. He asked: "Where is the little one? Call me the little one". Hasan came running until he fell in the Prophet's lap, and put his hand in the Prophet's beard. The Prophet opened his mouth and Hasan's mouth touched the Prophet's mouth. The Prophet then said: "My Lord! Love him and love anyone who loves him".' [Bukhari]

Here the reporter, Abu Hurayrah, says that his eyes were tearful whenever he saw Hasan, the Prophet's grandson, because he would remember this event. The hadith draws a very normal picture of a grandfather wanting to play with his little grandson. He allows the child to play with his beard and he lovingly puts his mouth over the child's mouth. But the prayer he says is exceptionally moving. He prayed to God not only to love the child but to love those who love him as well. And history records that all Muslims loved the Prophet's grandsons. He not only merited this love on account of his relation to the Prophet, but he was a man people liked and wished to associate with. Moreover, when he became Caliph, he stepped down after six months, to ensure the unity of the Muslim state.

Compiled From:
"Al-Adab al-Mufrad with Full Commentary: A Perfect Code of Manners and Morality " - Adil Salahi

Piety lies not in altogether shunning this material world, but in eschewing its love. Do enjoy the legitimate bounties of Allah in full, but do not be a slave of any of them. Never develop an attachment with them of a kind that cannot be broken. Eat well, dress well, live well. You may earn and keep wealth too, but never have your heart in such things. Their availability or absence should be of no consequence to you. Strive to achieve a state of mind in which you accept not just Allah's bounty but also when He tests you by subjecting you to meagreness of worldly resources. Whether it be a sumptuous meal or a piece of coarse bread, or even the prospect of starvation, each state should be considered as Allah's gift for you. Be happy and at peace in each state. When the heart is free of the cares of this world, why would you disobey Allah on Whom you are dependent for all your worldly needs? And then, why should you be sad on losing the riches of the world? Never incur Allah's Wrath for the sake of this world; never make yourself sick and weary on account of this world.