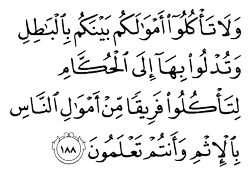 Abu Hurayrah reports that the Prophet (peace be upon him) said: 'The worst of my community are those who talk too much, resorting to pedantry and insolence; while the best of my people are those who have the best manners'. [Ahmad]

People should be precise and limit themselves to making their meaning clear without unnecessarily harping on about what is already clear. This is not surprising. We know that the Prophet included rich meanings in few words. In this hadith the Prophet mentions three qualities that make a person join the worst type of people. These are the chatterers who almost speak non-stop. They admire their own speech and feel that they have a claim to being listened to. They love to hear themselves speaking. This is an attitude of arrogance that some people often exhibit. If such a chatterer adds pedantry and insolence to his speech then he is really a pain in the neck. What is worse is that he merits the Prophet's description as being one of the worst in the Muslim community. By contrast, the best people are those whose manners are fine and who are kindly to people. They listen to others and accept what is right, without claiming any monopoly of speech or knowledge.

Islamic responsibility demands that no damage occurs to nature in process of man's usufruct of it. Islam teaches that nature's materials and forces are gifts granted by God to us. The gift, however, is not transfer of title. It is a permission to use for the given purpose. The owner is and always remains Allah (SWT). As the Mesopotamian used to say: He is the Lord of the manor, and man is merely the servant. This attitude is perfectly Islamic as well. The gift then must be returned to the Creator at our death or retirement, improved and increased through our production. At the very least, it must be returned intact, as it was when received.

The "rape of nature" and her pollution which are currently plaguing industrialized societies are the result of their irresponsible usufruct of God's gift of nature. It is capitalism gone mad, inebriated as it is with its success, that leads the Western entrepreneur to dump the harmful refuse of his productive operation in the lake or river unmindful of its fatal effects upon animals, plants and humans. The land is stripped open to yield its minerals and left unfit to use, ugly to look at and causing all kinds of hazards to humans as well as to environment. "Ecological balance" and the "environment," "recycling" have become common terms in the West by the frequency of their violation. Nature is being "raped" all around us: the plankton of the sea, no less than the ozone of the stratosphere, everything stands threatened by the wasteful and irresponsible production, the "planned obsolescence" of Western industries. For the first time in human history, capitalist entrepreneurs speak of the "planned obsolescence" of their products and do so without the least bit of shame. Evidently, the victim is in the dominating ideology which is incapable of providing its adherents with the psychic mechanism needed for all discipline. It provides neither a vision of the future, not criterion, nor a conscience with which to put a brake upon the insatiable appetite for profit. Nothing is capable of standing up before this capitalist appetite determined to pursue its everfleeting objective pereat mundus. Pereat mundus is not a figure of speech, it is literally true of the Western capitalist whose product is arms, alcohol, radioactive and other harmful materials. But it is also true of the factories of many products whose production releases toxic wastes.

Such abuse of nature runs diametrically counter to the ethic of al Tawhid, and is condemned in the clearest of terms. As Islam sees it, the production operation must be innocent and pure from beginning to end. Neither animal, plant nor human may be hurt by it. Where damage occurs, it must be compensated. Where there is no individual citizen or group to bring the damaging entrepreneur to justice, the Islamic state, as trustee of nature, is obliged to bring the abuser to account for his deeds.

Compiled From:
"Tawhid: Its Implications for Thought and Life" - Ismail Raji Al-Faruqi, pp. 176, 177